August 26, 2020
(I originally shared this story on my Facebook, but I wanted to post it here on my blog too, simply as a reminder to stay conscious of your surroundings) — Yesterday I went to a friend’s birthday dinner in downtown LA, where this picture was taken. 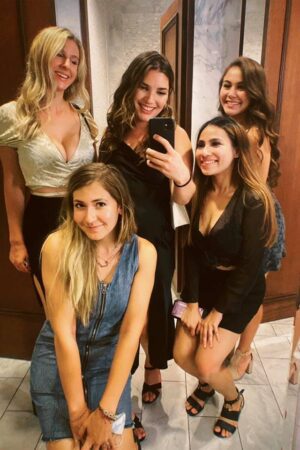 I left the restaurant around 10pm and started walking towards the train, which was only supposed to be a 15 minute walk. Within 5 minutes, I had this terrible feeling of being watched / followed. I noticed a man across the street who was following my pace, and I was like, “Oh, that’s a bit odd,” but just continued down 2nd street. I started to feel really uncomfortable, because he kept getting closer and closer until I could hear his footsteps beside me. At this point, I was close to the Japanese American National Museum

in DTLA, so I decided to sit on the steps of the museum to throw the guy off + just hoped he would keep walking. But he continued to watch me and circle around the museum for the next ten minutes. I’m so grateful for the security guard at the museum who walked up to me and asked if I was okay; I was feeling really uneasy at that point, because off Alameda Street, there is a lot of construction happening, which creates those isolated, dark alleys under the scaffolding. The security guard was so kind + I think he could tell I was anxious, so he watched as I walked through onto Alameda and ensured I made it to the train station across the street.

At this point I thought the guy following me was gone… then he showed up at the Little Tokyo train station and literally sits on the bench beside me, way too close for comfort. But I kept telling myself, “No, this isn’t happening – he was just walking to the train too. I’m overreacting. He must have just taken the same route as me.” I decided to stand up anyways because I felt uncomfortable with how close he was sitting to me. So I stood up, and he stands up. Basically mirroring my actions and continuing to keep a watchful eye.
Finally, the train comes, and this man is staring me down; something told me not to get on the train. I had this feeling he was trying to follow me home… so the train comes and goes. Then another train comes and pulls away from the station. So by then, I knew something was wrong + he was intentionally watching and waiting. I am incredibly grateful for the two LAPD police officers at the Little Tokyo station who noticed what was going on and offered to accompany me on the train. At that point, I was like, “I’ve had enough heart palpitations tonight, I’m calling an Uber,”

But yeah… it was frightening. I’ve lived in LA for five years and have only had a handful of unsafe experiences, where I felt like something was wrong in my gut. I feel a little dramatic typing this up, because nothing bad happened per se, and I don’t know what his actual intentions were; but I just want to remind people to be aware when they’re walking around the city. If I had headphones in or wasn’t conscious of my surroundings, this man absolutely could have followed me back to my doorstep. Stay safe friends!
« A new journey~