REPORTING: Why Teen Girls (and Everyone Else) Should See He Named Me Malala

When it comes to teen girls, we usually aren’t portrayed accurately. Mainstream media is constantly depicting adolescent girls as vapid and selfie-obsessed, making it seem like we’re unable to engage in an intelligent conversation. We’re whiny and dumb, instead of brave or resilient, and we’re incapable of caring about anything other than boys and makeup. Just because we like One Direction, doesn’t mean we’re incompetent!

In the new documentary film, He Named Me Malala, a new conversation about teen girls is ignited. He Named Me Malala is about 18-year-old activist, Nobel Peace Prize winner, and (most importantly) very awesome girl, Malala Yousafzai.

Malala became an advocate for girl’s education after her own schooling was threatened. She was told by the Taliban that she could not go to school anymore, simply because she was a girl; Malala refused to accept this sentencing. Instead, Malala was vocal on the topic of gender equality, launching an anonymous blog with BBC called “Diary of a Pakistani schoolgirl”. In 2009, she wrote under the pseudonym of Gul Makai, as she exposed the world to the daily struggles she faced living in Swat Valley under the rule of Taliban militants.

In early October 2012, the Pakistani student was targeted. A Taliban gunman attempted to assassinate young Malala, but even after a bullet went through her head, she refused to be silenced. (I know, how fierce is she?!)

He Named Me Malala, directed by Davis Guggenheim, covers all this and so much more. The film follows the Yousafzai family before, during, and after the shooting and documents Malala’s courageous spirit. Her story is heart-warming and inspiring and most surprising of all, funny. Filmmaker Davis Guggenheim manages to expose a side of Malala that hasn’t been revealed before. She’s a simple, regular teen girl despite her incredible courage that has resonated across the globe.

Although this film will entertain and inspire a diverse audience, I think teenage girls especially need to see it. It shows young girls that they can be curious intellectuals who have the ability to change the word. He Named Me Malala is screening in select theaters now. 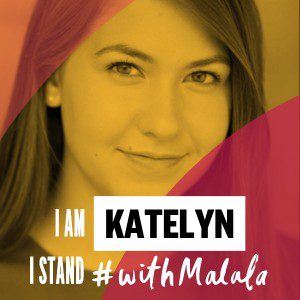