Because of my campaigning last spring, most of you guys probably know that I really like Bernie Sanders. I feel like he’s America’s grandpa! 👴❤️ I canvassed around Los Angeles and volunteered at phone banks last year when he was running to be the Democratic party nominee. He’s been to LA several times for speeches and activism events, but each time I missed him because my class schedule conflicted. Until now! 🎉 This morning I went to a rally in downtown Los Angeles and was able to see Bernie speak about California’s Proposition 61. 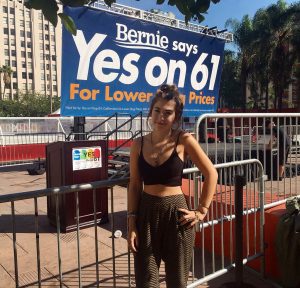 Bernie spoke about the benefits of Prop 61, (or the California Drug Price Relief Act), and why Californians should vote “yes” tomorrow. The general message is that voting yes on Prop 61 will make Rx drugs more affordable and stop pharmaceutical companies from raising costs. Pharmaceutical companies are charging excessive money for prescription drugs that people need to survive, and voting yes on Prop 61 will bring a federal referendum to keep drug cost to a minimum in future legislation. 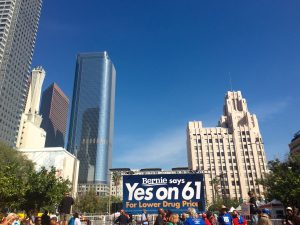 The raise in prescription drug prices has been a huge issue, (or as Bernie says, “yuuuge”). I have seen numerous articles about the cost of epi-pens having a 500% increase. Individuals being treated for an AIDS-related disease had their pill go from $13.50 to $750 overnight. Elderly individuals are cutting their pills in half, because they can’t afford their prescription. I feel like it becomes an ethical issue when pharmaceutical companies exploit people’s illnesses with their enormous profits.

In California, I’ve been seeing so many ads with false information and propaganda regarding Prop 61. I didn’t realize these commercials were paid for by pharmaceutical companies, such as Pfizer and Merck. $126 million dollars has been spent on this campaign to encourage voters to vote against Prop 61.

In general, I try to be informed on politics and current issues (I am studying journalism, after all 😉). Especially when it comes to voting, it’s important to know what’s on the ballot and what everything means. There is so much deception and misinformation being spread, (or true information being covered up), that it’s difficult to navigate elections and voting.

I’ll include some links and resources below, for those who want to learn more about Proposition 61.

• LA Times’ “What you need to know about Prop. 61, the spendy prescription drug measure on November’s ballot”

• Our Revolution’s “Yes on Proposition 61: Drug Price Standards” — Our Revoltion is also a great website to learn about the other initiatives in California

Thanks for reading, and don’t forget to vote tomorrow in the 2016 Presidential Election! 🇺🇸